Too Cool for School: Disruptive tech is changing how kids learn

In a piece on magazine stands this week, writer Victor Luckerson introduces TIME readers to “six new technologies that are shaping the classrooms of the future.” We’re thrilled about this latest news, especially considering how device-dominant this issue of TIME magazine, entitled “Never Offline” appears to be! The piece that makes mention of the Empathy Toy is posed as a list of “disruptive tech,” while the cover story prominently features a near future where “wearable tech will change your life.”

Inside the pages of TIME magazine, amid 3-D printers and touchscreen chalkboards, a toy for empathy holds its ground as one of “six new technologies that are shaping the classrooms of the future.” But how can the Empathy Toy be tech when it’s not battery-operated? Contrary to the more ubiquitous understanding of tech as computers and internet-connected devices, the term technology, more plainly, describes tools being used to accomplish your objectives. In this way, a game played to develop 21st century skills and a 3-D printed model frog to learn about biology, are both rightly technology. Each being used by forward-thinking educators to innovate in education, in order to ready students for their future careers.

TIME magazine is quick to point out that the education space is awash in new innovations, stating that “nearly three-fourths of U.S. teachers use technology to motivate students to learn, according to a survey by PBS LearningMedia.” And while it’s promising that “research shows that using next-gen tech in the right ways can make students smarter, more engaged and more creative,” we think it’s important to remember that, for the most part, it’s less about the tools and more about how you use them.

Brian Solis, a digital analyst and speaker, sums it up perfectly in one of our favourite quotes: “Innovation doesn’t always correlate to technology. Most of the time, it starts with perspective: seeing things differently.” 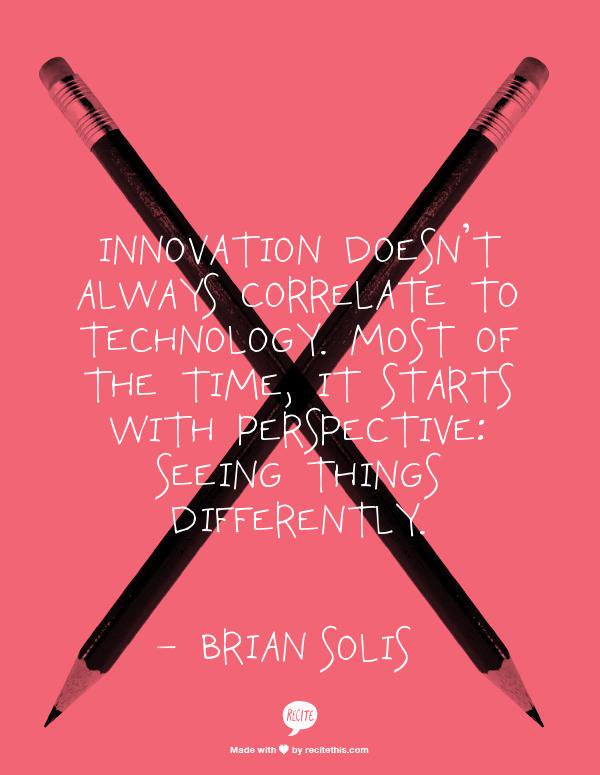